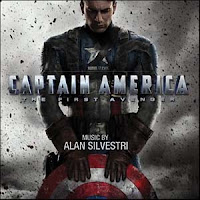 Alan Silvestri is nothing if not predictable consistent. If someone had asked me to write a score that sounded like it was written by Alan Silvestri, this is pretty much what I would've come up with. It's the familiarity factor. It may not even be his fault. It's just what the people he works for ask expect him to do. I for one can't stand his sappy romantic/comedy scores but there's something about his action scores that I just can't help enjoying (for the most part). I think it's because he's still willing to go for a certain old-school dramatic flair and play big moments, well, big.

If you're a fan of Alan Silvestri's action music (as I am) there's a lot to enjoy here.

Big brass, pounding percussion and swirling strings and woodwinds. Everything you've come to expect is here. If, however, you're expecting something fresh and groundbreaking and you're a fan of Alan Silvestri, well, you should know better. It's still fun to listen to and it's been interesting listening to Silvestri streamline his action scoring over the course of the last ten years eliminating pretty much everything that's unnecessary. Back to the Future, Predator, Judge Dredd, The Mummy Returns, Van Helsing; they're all here.

There was something oddly familiar about the main theme. Here it is:

And what it reminds me of can be found here (sorry, embedding was disabled).

I'm not saying Silvestri stole the theme because this is actually pretty standard fare if you're going for that "modern" Americana sound (and it's easy to sound like this). I just find the similarities striking.

A few thoughts on the film itself. This may be the best of the Avenger films. I think that perhaps one of the reasons for this is that it wasn't made by a young director. Joe Johnston's films have always had more than a hint of nostalgia and old-Hollywood to them (The Rocketeer, Jumanji). I think that had a younger director attempted to make this film there would have been a great temptation to try to be a little ironic about capturing the spirit of America during WWII. This is also why I think that Alan Silvestri's score is pitch perfect for the film. It captures that Americana spirit with an exceptionally bold - if somewhat unoriginal - theme and Johnston seems to encourage it throughout the film. The album is a generous 74+ minutes and is a lot of fun to listen to. Basically, if you're a fan of Silvestri's work, you'll love this score. If you find his music insipid and dumb, you're not going to like it.

And just to finish off, here's the end credits march:

How the heck did I miss the memo that yesterday was Benny's hundredth birthday?!?
Bernard Herrmann is widely considered one of the greatest film composers ever. He revolutionized film music and created damn near all the things that are now considered cliche'. He wrote with incredible speed, composed directly into full score - in ink - and left such an indelible impression that many people cannot think of Alfred Hitchcock's American films and not immediately think of Herrmann's music. He once famously quipped that "Hitch only finishes a picture fifty percent; I have to finish it for him."

I shall celebrate belatedly with some of my faves:

North by Northwest
The Seventh Voyage of Sinbad
The Day the Earth Stood Still
The Ghost and Mrs. Muir 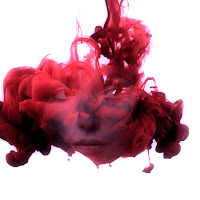 Mike Stromenger's Curtain Call is a 17-part murder mystery web series from this spring that garnered positive reviews and a fairly sizable audience. The score is an orchestral/electronic amalgam composed by Benjamin Emory Larson and Reed Reimer.

In the interest of full disclosure, Reed is a friend of mine. That being said this isn't necessarily going to be a session of sunshine-blowing, pixies and unicorns. That would be irresponsible.

The album opens with the song "Dawn" sung onstage by the victim just prior to her untimely demise. The song serves as the driving force behind much of the musical material for the score. In that respect it functions like the better Bond songs (in fact, it somewhat reminds me of some of David Arnold's work for that series). There are two other themes throughout the score including a love theme for Jennifer and Matthew and a four-note “death” motif.

What we have here in Ben Larson and Reed Reimer is a young composing duo that is sure of their craft. We may recognize where they are coming from but for the most part I rarely felt like they were trying to consciously imitate other composers’ sounds or styles (the one notable exception is that “Across the Stage” is pretty obviously based on John Williams’ “Across the Stars” from Star Wars Episode II: Attack of the Clones). To me, standout tracks include: Dawn (Cassie’s Song), Curtain Rises, Across the Stage, Jennifer, Confession, Unrequited, Pat the Liar, Confront and Center, Little Things, The Dance and Curtain Falls. Despite the episodic nature of the series (even though it's really a two-hour movie broken up into seventeen parts), there's a cohesiveness to the score that is occasionally lacking in film music. Very few elements of this score feel out of place timbrally and those that are out of place have a positively jarring effect.

There are only a few criticisms that one might have of the music for Curtain Call. There is perhaps an over-reliance on the percussion to drive the score and that may very well be my own personal taste. The only other criticism I might have is the album presentation itself. I wonder if combining cues together (like John Williams might do) wasn’t a hindrance in some cases. While having a large number of tracks (like a Thomas Newman score) can be a little maddening, I think some cues might have been better experienced on their own.

There’s a lot to like on this album and a generous helping of it, too. The album clocks in at just under 75 minutes (74 if you must be precise). It’s a well-thought, excellently synthestrated (not my term) and richly varied score that, by-and-large, maintains its unity through texture and the use of a handful of well-developed themes. One is left to ruminate on the possibilities of what Larson and Reimer  might accomplish with a project that has a budget large enough for the hiring of live musicians...say about 65 of them. 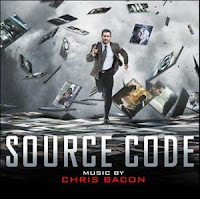 Source Code reminds me of the kind of score that James Newton Howard might write if he were scoring The Fugitive in 2011 instead of 1993. And why not? Chris Bacon worked alongside Howard for some time before striking out on his own.
My first take on the score was that it was a little on the conventional side; somewhat derivative. As I began paying closer attention I started having a little fun trying to pick out the influences on it. It seems to me that there might've been a lot of things on the temp track for the film. Danny Elfman (Mission: Impossible), James Newton Howard (King Kong), John Powell (the Bourne scores, Paycheck), Michael Giacchino (Mission: Impossible 3, Star Trek) and Alexandre Desplat (The Ghost Writer) seem to all bring their influences to bear on this score. All this with the spectre of Bernard Herrmann hanging over much of it (the same way he does - in the best of ways - over so many of Danny Elfman's scores).
Musically, the score hinges on a couple of primary motives. The first of which is a chromatic figure that isn't all that dissimilar to one of the primary motives in John Powell's Paycheck score. The other bears more than a passing resemblance to the rising-falling theme in James Newton Howard's King Kong. The score bristles with tension but never to the point of overdoing it. On the album at least there seems to be a slow and steady building of this tension that sustains one's listening interest.
As derivative as elements of Source Code may be, there's something fresh about it and there are many things to admire. First and foremost is the score's orchestration. Bacon has the audacity to utilize the entire orchestra augmented by minimal electronics and a keen sense of how not to overuse the percussion, both acoustic and electronic (Adroitly handled by the experience of lead orchestrator and conductor Pete Anthony). The music seems to follow the ebb-and-flow of the drama in the film itself instead of trying to play against it or above it. There's a sense of shape and drama to the album that makes it a nice listen, too. If the album is sequenced in film order then that means that perhaps Mr. Bacon had the opportunity to think about how the score is structured and this is an encouraging thought.
Overall, I find much that is enjoyable about this score for what should be a breakout effort for a young composer that may have interesting things to say in the future as he continues to develop his overall sound.
Posted by Herr Vogler at 4/11/2011 04:01:00 PM No comments:

As many of us know, there is a common misconception among folks that don't do it that somehow the act of composition is "easy" or that the music "flows from inspiration."

Many of us that compose know differently.

For some the music does come. I read a story about how Alan Hovhaness could compose anywhere and that one of his favorite spots was a local diner. One of the longtime waitresses of this establishment was amazed that it just flowed out of his pen. It's said that Bernard Herrmann would often compose his film scores directly into full score - in pen.

For me it's a different story. I have to false-start on a piece at least twice. It ain't pretty. You put in all this work only to realize that this is nowhere near what you want. Or maybe a better idea comes along.

I've changed my mind from my previous post. In it I wrote:


"One of the nominees this year is John Powell's terrific score for How To Train Your Dragon. It's a really fun listen but ultimately I don't feel like it's an Oscarworthy score."

I've changed my mind. I do believe it was Oscar worthy. In fact, I think it should've won. This of course reflects my own biases towards certain film scoring tendencies - namely that of the big, old-fashioned orchestral score. So there. I've corrected the record.
Posted by Herr Vogler at 3/03/2011 12:14:00 PM 2 comments:

Herr Vogler
Husband, father and composer. I've written for the concert hall, film and theatre. Really I'll write for anything. You want something for 24 mandolins??? Whatever. I'll do it. I freely admit my musical whoredom (like Stravinsky-the man did write a polka for a baby elephant afterall!).